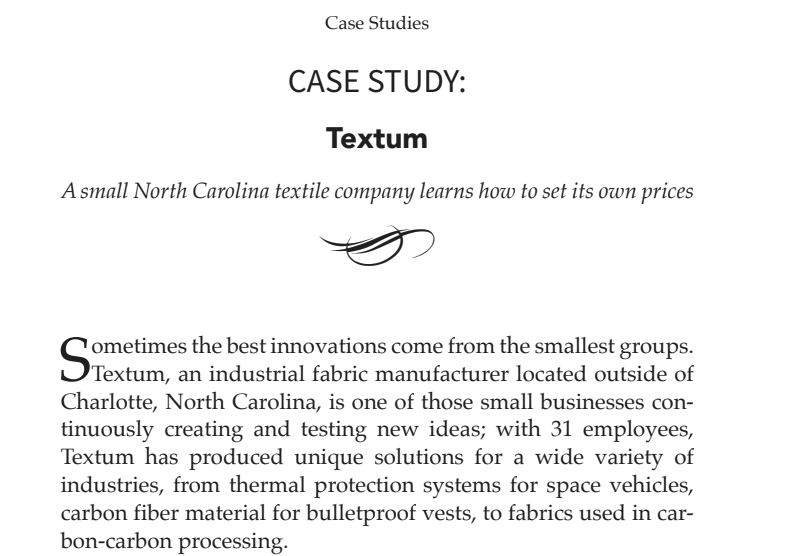 A small North Carolina textile company learns how to set it’s own prices.

Sometimes the best innovations come from the smallest groups. Textum, an industrial fabric manufacturer located outside of Charlotte, North Carolina, is one of those small businesses continuously creating and testing new ideas; with 31 employees,

Textum has produced unique solutions for a wide variety of industries, from thermal protection systems for space vehicles, carbon fiber material for bulletproof vests, to fabrics used in carbon-carbon processing.

Textum is used to innovating and excelling at every new challenge it encounters. But, in June 2017, annually rising healthcare bills were one issue that really frustrated and stumped Aaron Feinberg, Textum President and CEO. As a small company, Textum’s workforce was like family, and Feinberg, knew that rising healthcare costs were not sustainable for his employees or the business at large.

Feinberg quickly realized that his company needed a new health benefits plan, and also that he couldn’t do it alone. So, he enlisted the help of David Contorno, a Health Rosetta advisor who is well known for helping businesses, large and small, across the US, save hundreds of millions in healthcare dollars, to create a health plan that functioned as a living document, one that changed as its members’ needs and priorities evolved each year.

First, Contorno put the company in a level-funded plan under a BUCAH carrier to ease into the change process in 2018. Level-funded plans are often referred to as “partially self-funded” plans, as they operate in a similar way to a fully self-funded, employer-optimized plan, but have a lower level of stop-loss coverage, which is what protects employers from large claims.

(Level-funded plans work well for small companies that want the cost transparency and the minimal savings that come with self-funded plans, but cannot take on the high claims risk that large companies are able to withstand.)

Textum’s level-funded plan had an independent TPA, no PPO network, and all the Health Rosetta principles, which in turn helped Feinburg lower his 2018 healthcare costs by $75,762 for the year, or 32%. But, Contorno and Feinburg decided thatthere were more changes to be made and more savings to be realized the following year.

NEGOTIATING YOUR OWN RATES WITH DIRECT CONTRACTS

In 2019, Contorno introduced several new changes to the healthcare plan. After looking through Textum’s claims data from previous years, Contorno found that Textum had a history struggling with balance-billing issues from one particular sizable provider, which left many employees to deal with surprise medical bills that not only was a burden to them, but resulted in less savings than it could otherwise achieve. To prevent future surprise bills, Contorno created direct contracts with healthcare providers and hospitals in Charlotte that offered the best treatment. He worked with them to negotiate fair rates and payment methodologies for medical services and treatments using reference-based pricing (paying more than Medicare but less than the average PPO network). Then, Contorno bundled surgical and radiological services, implemented international prescription sourcing for low-cost medication, and had the plan waive all out of pocket expenses for members when they used these services.

Pre-negotiated rates helped Textum employees in a number of ways. It directed them to the best providers, increased cost transparency, and prevented them from incurring unknown costs, and improved patient-provider relationships. But Contorno didn’t stop there. Taking transparency to another level, Contorno
strove to eliminate personal bias by choosing to be paid on a fee
and performance basis instead of a commission-basis.

In sum, these strategies resulted in reducing Textum’s healthcare spending beyond what Feinburg expected. Textum employees have not seen an increase in deductibles since embarking on this journey to better healthcare in 2017. The 2018 plan had an expected max cost of $176,000. But thanks to the new cost-saving strategies implemented that year, Textum ended up closing the 2018 plan year paying only $155,000 and its health claims spending was 60% below the amount of premiums collected that year (40% loss ratio). If it had stayed on the previous carrier-based plan, Textum would have suffered a sizable $231,000 in healthcare spending in 2018.

In 2019 Textum’s max costs were expected to be $189,000. But, once again, Textum came in under budget, spending just $149,133. As these numbers so clearly demonstrate, Contorno helped Textum regain control over its healthcare plan. He helped Feinburg realize that employers have the power to negotiate and seek out the quality of care that they know their employees deserve

Unfortunately, not all employers know this, which is why finding the right advisors, like Contorno, who fights for the best interests of members are crucial to transforming the status quo and fixing healthcare.